Your session will expire in 0 minutes. 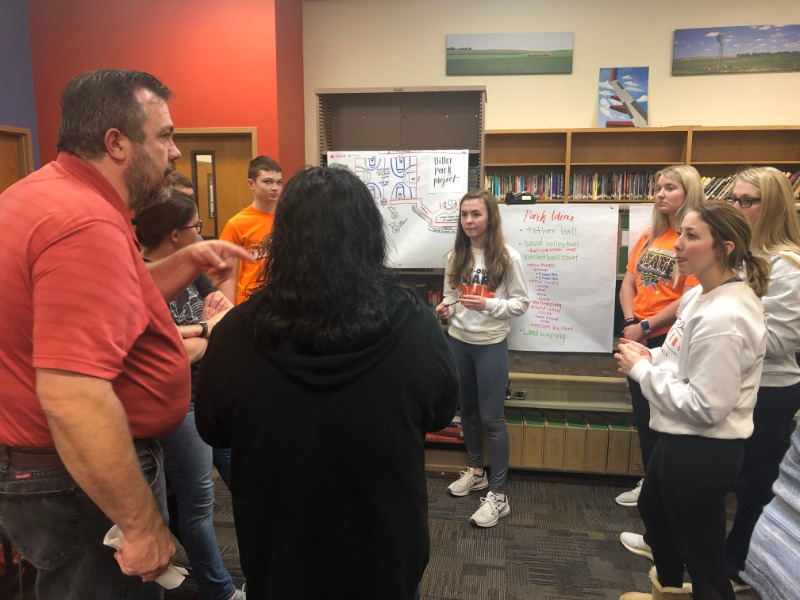 On Wednesday, January 15th, Student Council members gathered in the high school’s library to share their ideas with community leaders.  This event was a culmination of many months of work. The students first began the process when they met with Craig Schroeder at the beginning of the school year.  Mr. Schroeder represented Heartland Center for Leadership Development. The organization chose Diller-Odell because surveys had shown that over half of students there would consider returning to the community after high school.  This was well over the state-wide average.

A few weeks after this initial gathering, the students met with town leaders to discuss the needs of both Diller and Odell. First, they took a bus over to Diller, learning about the history of the town from Beth Roelfs. They took a tour of the park and were informed of the current plans for improvement.  Mrs. Roelfs challenged students to come up with a new plan for the basketball courts and surrounding areas. After finishing up in the park, the bus made it’s way back to the Odell Public Library. Once there, Catherine Renshaw and Joyce Kostal gave the pupils a brief history of Odell. Student Council then trekked down Mainstreet to the future location of the library.  Mrs. Kostal tasked members with finding new ideas to incorporate into the plan for the library. The students headed back to the high school and got down to work. They split into four groups, with two working on the Diller Park Project and two working on ideas for the Odell Public Library. After making posters and doing mock presentations, the students were ready to share their ideas with the communities.

On Wednesday, community leaders, county volunteers, and members of Growing Gage Communities gathered in the high school library to see what the kids had to say. News Channel Nebraska and the Daily Sun both came to interview the young volunteers. The Student Council members shared their ideas and discussed improvements with various town planners. By the end of the gathering, both parties were excited about possibilities for the future of both projects.  In the coming months, students hope to keep an open dialogue with the communities, and bring the ideas they shared to life.