Today
A 20 percent chance of showers and thunderstorms after 10am. Partly sunny, with a high near 83. South wind 10 to 14 mph, with gusts as high as 21 mph.
Tonight
Showers and thunderstorms, mainly before 4am. Some of the storms could be severe and produce heavy rainfall. Low around 62. South southeast wind 9 to 14 mph becoming light and variable. Winds could gust as high as 20 mph. Chance of precipitation is 80%. New rainfall amounts between a half and three quarters of an inch possible.
Wednesday
A 10 percent chance of showers and thunderstorms before 7am. Mostly cloudy, then gradually becoming sunny, with a high near 80. North northwest wind 9 to 14 mph.
Weather forecast provided by weather.gov.
Search

Art Club students were happy to get back to our annual art trip! We were able to make it to Omaha to visit the Joslyn Art Museum right before they close their doors for 2 years to do some renovations. On the way back from Omaha, we stopped . . . 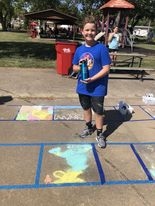 Diller Odell Art Club was happy to sponsor the Odell Days Sidewalk Chalk competition. Good job to all that participated! We had some awesome sidewalk artwork.